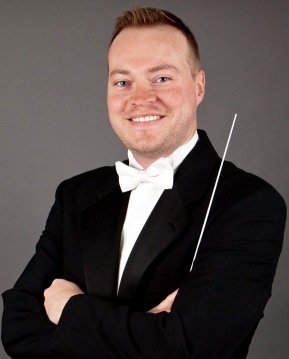 David Jacobs is currently an Associate Professor of Conducting and the Director of Orchestral Studies at the University of Oregon where he conducts the UO Symphony Orchestra and leads the graduate program in orchestral conducting.  He also serves as the Music Director for the Eugene-Springfield Youth Orchestra.

Dr. Jacobs began his career as an orchestral musician and performed widely with many respected orchestras including the Pittsburgh Symphony, Sarasota Orchestra, Naples Philharmonic, New World Symphony, Palm Beach Opera, and Sarasota Opera.  During his seven years performing as an orchestral musician, Jacobs developed a passion for conducting, and in 2007, with very little formal training, he was accepted into the conducting studio at the Eastman School of Music. There he worked with virtually every student ensemble and was the recipient of several student prizes, including the Frederick Fennell Fellowship and the Walter Hagen prize for excellence in conducting.

While a graduate fellow at Eastman, Dr. Jacobs developed a great affinity for working with ambitious music students.  His passion for university students is now nationally recognized, having been invited to guest conduct orchestras at Baylor, Florida State, Bob Cole Conservatory in Long Beach, Northern Arizona, as well as two invitations as a guest artist in residence at the Eastman School of Music, where he gave multiple concerts and taught graduate level courses.  In his scholarly pursuits, Dr. Jacobs has authored several articles on conducting and interpretation and has given lectures and master classes to worldwide audiences.  His areas of expertise are conducting pedagogy, subdivision techniques, music semiology, Russian symphonic music, and musical hermeneutics.  Dr. Jacobs has also earned an impressive reputation as a conducting teacher, attracting students internationally.  His students have gone onto prestigious programs such as Peabody, Eastman, Michigan State, Bard College, and the Aspen Academy of Conducting, as well as gaining employment as youth symphony directors, professional orchestra assistant conductors, and college professors.

David is credited on three commercially available albums. He served as assistant conductor for “Manhattan Music,” a collaboration between the Canadian Brass and the Eastman Wind Ensemble, released by Opening Day; conductor for “Let Others Name You,” an eclectic fusion of contemporary orchestral music with Balinese Gamelan performed by the Ossia Chamber Orchestra released by New World Records; and conductor/instrumental performer on “We Proclaim,” a collection of worship music released by Ekklesia.

David is married and has two children (ages 17 and 14).  His family enjoys living on small acreage in the Mohawk Valley where they dabble in homesteading – raising chickens and organic gardening.